Don't get us wrong, dedicated opt-in forms are certainly important, and Formidable Forms makes it easy to create them.

But there are also tons of other areas on your WordPress site that you could use to generate new subscribers and strategies that you can implement to make your email marketing efforts more efficient.

This feature is included in the Formidable Business plan and higher. 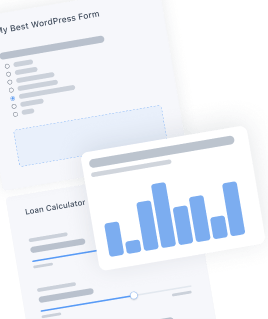 on your first year of Formidable Forms!

Here's What Our Community is Saying:

Excellent plugin, you can create many forms for every idea you have, the only limit is your mind.

This is by far the most sophisticated yet easy to use form plugin for front-end post creation available in the WordPress eco-system. I have tried using Gravity forms, Ninja forms, WP forms, Toolset...none of them come close.

Can I create flexible GetResponse forms?

If you want, you can use Formidable Forms to create dedicated GetResponse forms to use in popups, on landing pages, or anywhere else on your site. But you can also take things further and connect other types of forms to GetResponse.

For example, what if you could add a checkbox to your WordPress registration form that lets visitors subscribe to your GetResponse list? What if you could create an interactive tool, like a mortgage calculator, and add people who use your tool to GetResponse?

When you use Formidable Forms as your GetResponse WordPress plugin, the possibilities are pretty much endless when it comes to the types of GetResponse forms that you can create.

No matter what type of form you build, you'll be able to sync your form up to GetResponse and map fields from your form to fields in GetResponse.

Beyond mapping the email field from your form to GetResponse, you can also sync names, birthdays, locations, and more.

Can I use conditional logic for better segmentation?

Formidable Forms also makes it a lot easier to segment your GetResponse forms. See, if you want your email marketing to be as effective as possible, you might want to segment your subscribers into different GetResponse lists based on how they filled out your form.

For example, you could create a list of checkboxes that indicate a user's interests. Then, you can add people to the corresponding list for that interest to send them more targeted emails and automation sequences.

When you use Formidable Forms as your GetResponse WordPress plugin, you can easily set up this type of segmentation using conditional logic.

You'll be able to add as many scenarios as you want to handle every single situation.

Can I control when to start autoresponder campaigns?

For example, if a person answered a form in a certain way, it might be more optimal to start them at a specific spot. You might have fields that let a person indicate their experience level. If they indicate that they're somewhat experienced, you might want to start them on day 7 of your auto-responder instead of at the beginning. Or, you could always add them to a separate list.

To help you achieve this on your GetResponse forms, Formidable Forms lets you enter a specific Autoresponder Cycle Day to start a subscriber in the middle of an autoresponder campaign.

How can I get started?

If you want the most effective GetResponse WordPress plugin, Formidable Forms is your best option because you can:

To get started, purchase the Formidable Forms Business or Elite plan today.

Get anti-spam options including honeypot, reCAPTCHA, Akismet, and the WordPress comment blacklist.

Add contacts to any ActiveCampaign list from your WordPress forms.