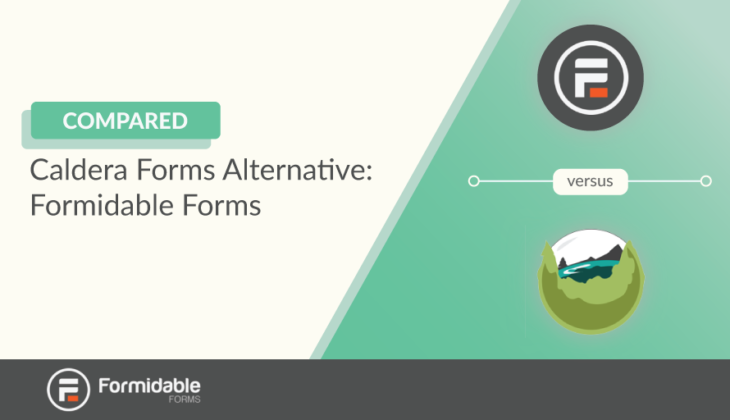 Caldera Forms will be retired December 31 2021! If you're not using Caldera Forms, save yourself a lot of work and choose an alternative now.

Already using Caldera Forms? Then it's time to switch to a new form builder! This article will help you decide if Formidable is the best alternative to Caldera Forms.

We get this question all the time. What's the difference between the Formidable WordPress form builder and all the others out there? Actually, there are a lot of differences! Take a look at the form builder alternatives we've already written about:

If you don't know much about Caldera forms, it's a WordPress forms plugin with a drag and drop interface. If you used Caldera forms and are looking for an alternative, Formidable might be the one.

Since many Caldera Forms websites will be migrated to another plugin, be sure you know the Ninja Forms alternatives too!

Let's compare these two form builders side by side so you can decide for yourself.
👉 Read more: What are the Best Free WordPress Form Plugins?

What is Formidable Forms?

Formidable Forms is a drag and drop form builder with dozens of powerful features. One of the things Formidable is known for is its intuitive interface. If you're new to WordPress forms, you'll enjoy Formidable's easily accessible features. If you are a WordPress veteran, you'll love Formidable's advanced features and options.

Formidable is the only form builder with a focus on displaying data anywhere on your site. That means you can collect data with your forms, then display it however you want. One example: create a poll, then display the results in real-time after a user submits their response!

What is Caldera Forms?

Caldera Forms is a form builder with a similar premise. They offered several free form building features with the option to upgrade for more advanced features.

Their plugin functioned based on a top-down drag and drop user-interface. It can take some getting used to, but it served the same purpose as many similar WordPress form plugins available.

Is Formidable Forms like Caldera Forms? Let's compare Formidable and Caldera side by side to find out.

What should you look for in a form builder?

In this comparison, we'll be looking at 4 main areas:

Formidable Forms has such an easy-to-use interface that it can deceive advanced users. Countless hours have been spent tweaking the UI. Since Formidable launched in 2010, there have been many big UI updates, each building on the last. The result? One of the best and most intuitive form builders on the market.

Caldera Forms does indeed have a drag and drop user interface. But we'd be hard-pressed to call it intuitive. True, we are biased. But our testing resulted in confusion right from the start. The kind of feeling that makes you want to uninstall a plugin within 5 seconds of using it.

Long story short: can you build a form using Caldera? Yes. Is it easy? Not really.

When considering online support, there are a couple of key things to include:

Caldera Forms has just over 100 knowledge base articles. That's a hefty amount, but many of the articles are outdated and oddly detailed in a way that doesn't make much sense. Then there are several knowledge base posts that are very sparse, making for an odd mix.

Since Caldera Forms is being shut down, the support has been very hit or miss. In the past months, most support requests have gone unanswered, and many reviews have mentioned the neglect.

In addition to making customer support a priority, Formidable Forms also has an active community where users can find answers, as well as find pro developers who know Formidable Forms extremely well.

The overall review rating for Caldera Forms is 4.2 over at WordPress.org. The Formidable Forms rating is 4.7.

Formidable Forms and Caldera Forms both have free form building features. Formidable has a few premium plans which give access to more features. Caldera Forms operated a similar model where they packaged add-ons features together. 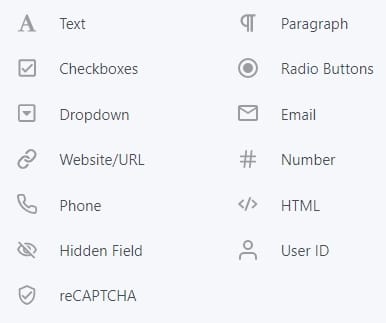 Formidable Forms has 14 form fields in its free WordPress plugin. It's premium plans unlock many more fields and features.

Besides form fields, Formidable has dozens upon dozens of field options & add-ons available for premium users (we'll cover those in more detail below). 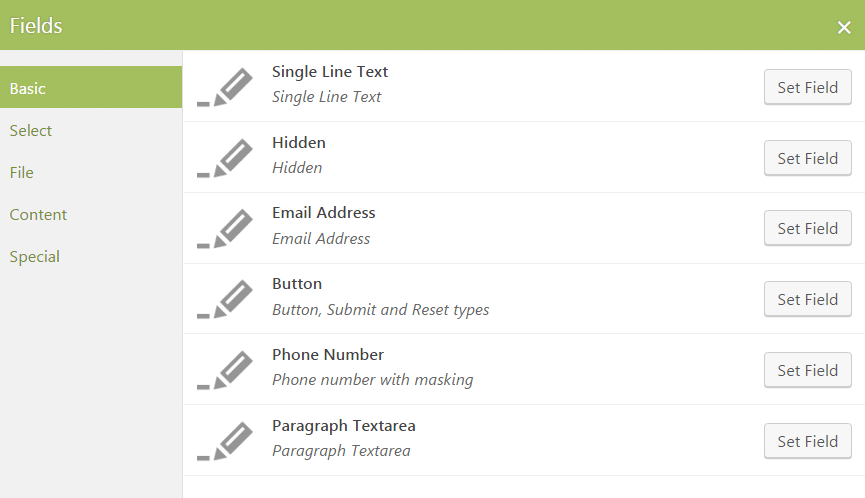 Caldera forms has 32 fields in total. All of them are available in their free version, with the exception of custom fields. Take that number with a grain of salt, however, because there are several fields that are really just specialized text fields.

Formidable's most basic premium plan has almost all the features that Caldera's most expensive plan contains.

Update: Caldera Forms upgrades are no longer available. The paid plans have been removed from their website, so only the free version is currently available.

If you've don't already have the Caldera Forms add-ons, they are no longer being offered.

In terms of integrations, they had up 14 (with their highest tier plan) including Stripe, MailChimp, and Zapier integrations.

Formidable Forms, on the other hand, has no less than 30 add-ons. However, if you're looking for a Caldera Forms alternative, you should know that there are a few add-ons Formidable doesn't yet support. See below for more details.

Formidable Forms vs Caldera Forms: Which one wins?

Although there are some users who can benefit from Caldera Forms, Formidable Forms will be the WordPress form builder that many more people will choose.

Still, there are some great things in both plugins that users will gravitate towards.

But for those who need a little more, Formidable Forms has several features to help you make the most of your WordPress site and your online forms.

Here's the deal: Formidable Forms integrates with all the top platforms. From CRM to email marketing platforms, dozens of platforms work flawlessly with Formidable. Stripe, Paypal, MailChimp, Zapier, Constant Contact, Hubspot, ActiveCampaign... the list goes on and on.

👉 Learn more: How to Create Constant Contact Forms in WordPress

There are a number of ways to collect data with Formidable Forms. And once you've got the data, you can use it to your advantage by displaying it in a variety of ways on your site.

Take a look at some of our survey blog posts to learn more:

Again, we know we are biased when we say that the Formidable drag and drop form builder is the best. Many form builders make the claim that they can build forms in a matter of minutes. Few of them can actually back up those claims. Formidable is one of those few.

Are you a developer? If so, why don't you go ahead and take credit for your projects? Seriously! The Formidable form builder includes a white label feature so you can name it whatever you want. That way, your clients will think you made it customized just for them!

If you switch from Caldera Forms to Formidable, you'll love how fast it is to build new forms using one of the 175+ form templates.

Ongoing support you can depend on

Formidable Forms isn't going anywhere. The plans for the future are never-ending, and we'll just keep getting better year after year.

Well, at this point, no one should be choosing Caldera Forms since it is no longer supported. But here's more info so you know the differences.

You depend on a feature Formidable doesn't currently offer

If you're looking for a switch, Formidable might not be the best option if you rely on a direct integration with PayPal Pro, CiviCRM, Braintree, Pods, or ConvertKit.

For most users, the clear victor is Formidable Forms. Caldera Forms could work for you in cases where you don't need advanced features.

For those who want to sell services or products on their WordPress sites, both plugins work with the top eCommerce platforms with one notable exception: Caldera forms does not integrate with WooCommerce, whereas Formidable does. This could be a major deal-breaker for those who are already invested in a WooCommerce solution.

We hope this Formidable Forms vs Caldera Forms comparison has helped you learn the differences between the two form builders.

Formidable Forms is a great Caldera Forms alternative! In addition to the options listed above, you could also consider JotForm, Fluent Forms, Forminator and our list of the best contact form plugins.

Formidable Forms is the most advanced WordPress form builder on the market. Get started with the free form plugin or one of our premium plans today!