When any two systems communicate, they need to have rules they both understand and follow so they can communicate back and forth. Much like sending paper letters back and forth using a mail service, computer systems talk to each other by sending electronic messages back and forth across networks. When sending a package to a friend—as long as you follow the rules—you trust that the package will get to the right person at the specified place. The “protocol” or rules for mailing a package to a friend might look something like this:

Hyper Text Transfer Protocol, commonly referred to simply as HTTP, is the protocol used by many computer systems to "talk" to each other. Importantly, it is what your browser uses to communicate with the servers that host the websites you visit. As essential as it is, however, it does have a weakness: security.

Even if you followed the correct mailing protocol to send your package to a friend, you might worry about a shady neighbor shuffling through your mail. Similarly, when data is being transmitted through a large network (such as the internet), it can be problematic if the data being sent is sensitive.

Thus, the need for HTTPS.

HTTPS, or HTTP-Secure, is really the same old HTTP that we have been using, but it's encrypted. If HTTP is like using a delivery van to deliver a gift in a cardboard box to a friend, HTTPS is like delivering that gift inside a locked safe in an armored truck. Instead of steel and locks, however, HTTPS uses sophisticated mathematics. What’s more, with HTTPS, only you and your friend have keys to the armored truck.

Just like a delivery service is only concerned with delivery of a package and not what you do with it after it arrives, nether HTTP or HTTPS affect the data before it is sent, or after it arrives. They are simply a means of delivery. So, while HTTPS is great for sending and receiving data, it doesn’t encrypt data stored on a browser, or on a website’s server. 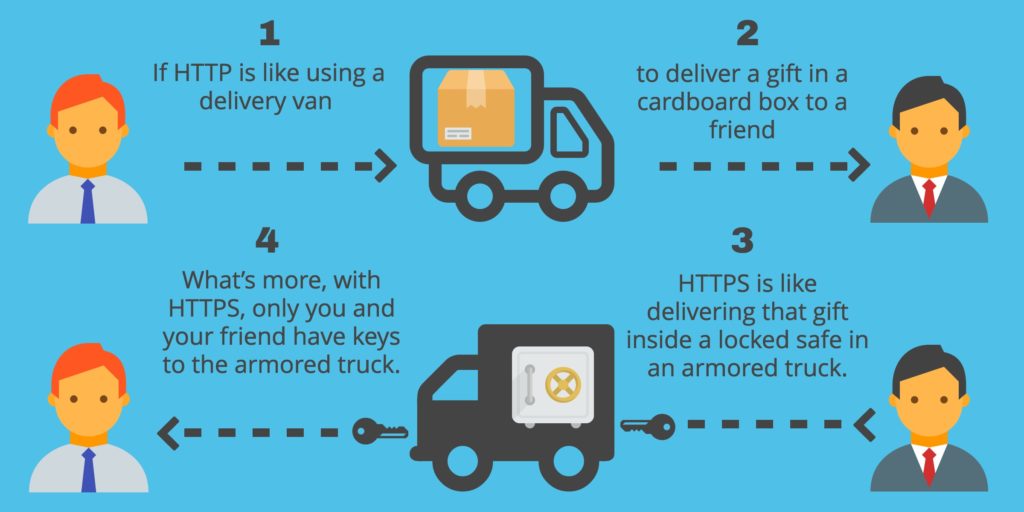 What is the difference between HTTPS and HTTPS and TLS?

Remember earlier when we defined HTTPS as HTTP-Secure? This is because the “package to a friend” is still delivered using HTTP either way. It’s just how you package it that is different. The difference is that with HTTP your package is transported in a cardboard box via delivery van, and with HTTPS your package is placed in a locked safe inside an armored truck for its journey.

Think of Secure Socket Layer, or SSL and Transport Layer Security, or TLS, as the protocol for the encryption, or the “strength” of the safe and the armored truck you mail your package in. To summarize:

From a more technical standpoint, SSL is an older method for handling encrypted traffic. It is no longer considered safe for secure data transmission. We now use TLS, a more advanced method.

Despite the fact that they are different, the term SSL is often used (knowingly or not), when referring to TLS. Generally speaking, whether you see SSL, TLS, or HTTPS, they reference the same thing: encrypting data for transmission with TLS.

If I’m not transmitting sensitive data, why does HTTPS matter?

During its first twenty years, adoption of HTTPS was slow. It was only used when necessary because it involved additional costs and technical understanding to implement. Two independent sources show that HTTPS adoption doubled between August of 2015 and July 2016.

There are several things that have contributed to increased adoption recently.

Google Search will rank for HTTPS

First, Google announced in 2014 that its search algorithm would begin to take into account whether a site was using HTTPS in its ranking results. This provided an incentive for sites to use HTTPS for the potential search rank boost, even if they weren't necessarily dealing with particularly sensitive data.

Cost for TLS has gone down

Second, lower-cost or even free certificates have become available. In order for HTTPS to work, a cryptographic certificate must be generated by a trusted authority, installed on a server, and regularly renewed (usually once a year, but sometimes with longer terms). These digital certificates cost money, which is often a deterrent for sites that aren’t generating much, if any, direct revenue.

Let's Encrypt was created as a solution to this problem and provides free certificates. This has lowered the cost to maintain a site on HTTPS by removing what can be the biggest cost involved.

Many CDNs (Content Delivery Networks) include TLS automatically, as do many hosting providers, such as WordPress.com.

The Network and Social Effect

Finally, beginning January 2017, Google’s Chrome browser will start to explicitly label HTTP sites as “not secure.” Data containing email addresses, passwords and credit card information is all considered sensitive. If your site collects sensitive information, even just from a login form, you will want to have HTTPS enabled to avoid being explicitly labeled as "not secure" in users’ browser address bars.

Read part 2: How to switch to HTTPS for secure WordPress forms